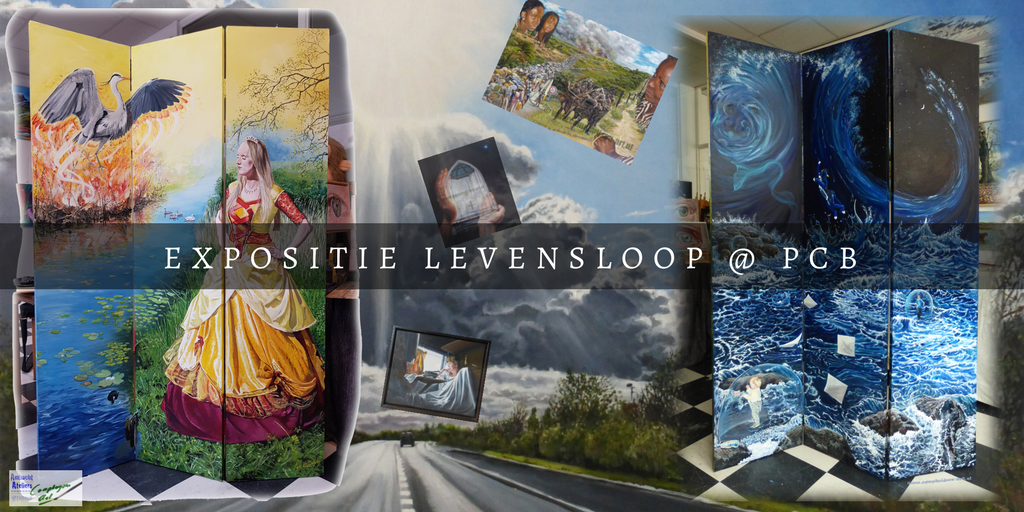 Hope is a special and sensitive theme to paint something about. We know the principles, "Faith, Hope and Love". Concepts that are as profound as they are worn out. They can become cliché words in a tourist shop on a jewelery or tile. I was raised as a Protestant, but I have sought my own way from there. Unconsciously with faith, hope and love as themes in myself present. I found a more liberal angle. Where I could think more "out of the box". And I was not prescribed how to live.

When I had already entered the path of art for some time and had painted more and more, I painted my impressions from Africa for a while. I had been there, and had many impressions indeed enough to put on canvas, and also the children wich I shortly met. I had seen those kids in a video, where someone told about their daily life. This video inspired me again in a series of paintings. I also gained "hope" in humanity, in the nature of man, by seeing how the children "survive" after the lack of their parents, who had probably died of AIDS. They have hopes and dreams about a better future.

I also painted animals and nature which I experienced a short period of time in Africa. At home, after a the series about Africa, I wanted to re-establish the link with my daily life. In this cold country, Africa is one of those countries that we can talk about and fantasize about and talk about in politics, but it is still a sort of "distant story". But how does it actually differ?

In my own village, shelter is also arranged for people from Africa, among others. But from so many countries. The newspapers are full of opinions and reports and reports about refugees. When I think about life, I find that my three paintings about refugees also fit into the context. Because, your life will only run so that it is so unsafe in your own country that you want to flee from it. Should you flee, do you want to survive, do you want to have a somewhat meaningful existence? Our world's war has been around a while ago, my parents have made it through the war. Not me. But here and now there are still countless wars. And these hunt people up. Whips minds up. 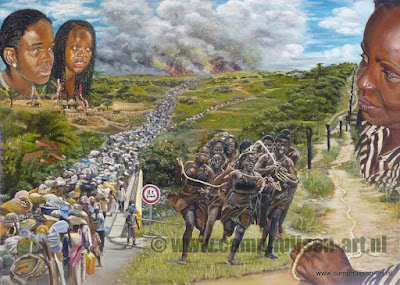 Even when people are fleeing. These are masses at a distance. masses of people with a different culture, and background, sometimes striking external differences with the countries where they end up. In search of safety, full of hope for a better life, acceptance and a place for them too. Did not leave voluntarily. But driven by hope. That's how I thought when I made this painting.

Why did I come to this subject?

One day I had an exhibition in a small gallery, which unfortunately no longer exists, it was difficult for the gallery owner to survive as a small independent with a business of his own. Anyway, it was a day that I was in the exhibition the opening was, I believe, already been when an acquaintance of mine suddenly came in. She is a volunteer in the organization of refugee work and had seen one of the women, whom she had met through this work on the streets. The woman is a refugee, and she literally walked "with her soul under her arm" that day. My acquaintance decided to give her some distraction and because it was about Africa she decided that my exhibition would be a good choice. The exhibition was called "Driven". I think it was in 2010.

I was in the gallery and suddenly these two women came in. I was surprised because of the acquaintance, but immediately afterwards quickly struck by this beautiful modest woman she had brought. The woman was surprised by the exhibition and soon she was struck and moved by my African work. And the emotion touched me again. It means that my work speaks to someone. And I want to achieve that. We got talking and the emotions and thoughts were exchanged. I wanted to do something with my feelings of that moment, after I had heard something from the woman's story. Whether I could paint her. she wanted that. We exchanged data and later we agreed.
Eventually I knew little about the woman and I asked her if she wanted to take something from her homeland, Angola. Something that she had left of her native country. She asked if she could take her children with her. So they posed for me later. Perhaps she had hoped that I would paint a beautiful portrait of her. Maybe she did not expect me to be so drawn by her status. He is a refugee. One man one woman with two children. Just for me highlighted above the crowd of people from the news. People with a life story. People with trauma. The receiving 'safe' countries do not know all these traumas. Often traumas are far too painful to talk about. But I know that this woman experienced something terrible. And that she had to tear her children from her homeland.

I had promised the woman that she would receive a percentage of the proceeds from the painting. Unfortunately, I have given her false hopes, because I still have the painting. Well .. who is hanging a violent story on his wall?
I only know that I was touched and wanted to paint about the theme. All those people who still leave home and hope in the hope of a better and safer and 'longer' life.
The painting 'Hope' is the first of three paintings about "refugees from Angola"